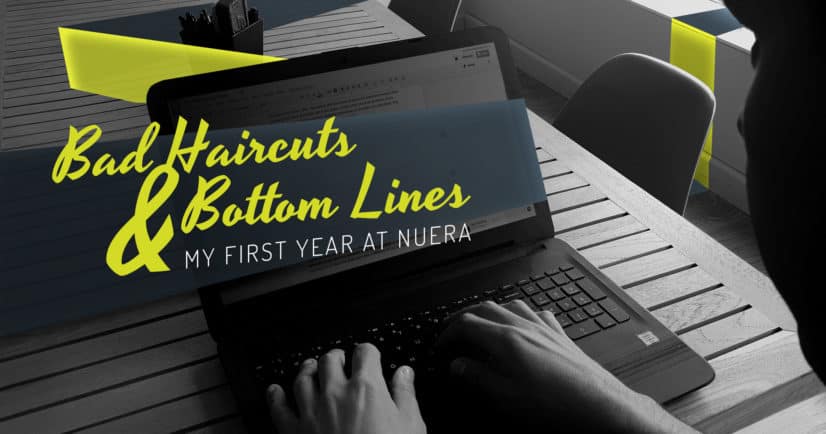 In the fall of 2016, I’d spent the previous five years working for two very large companies that were entrenched and successful within their respective space. Before that, I’d worked at a startup that went from a bunch of college kids in a dorm room to one that employed over 120 people and boasted monthly revenues of over a million dollars. I missed that feeling of building something from the ground floor so when I was offered a position to help accomplish that at Nuera, I jumped at the chance.

It turns out that building a company from the ground floor up is a lot harder than I’d remembered. I’d forgotten about what Drucker described as “the inevitable troughs of sorrow” that every startup experiences. I’d also conveniently failed to remember the psychological and physical toll (I’ve lost 15lbs…the startup diet does have its perks) the experience exacts when you’ve got so much proverbial skin in the game. Luckily, when you work at Nuera, you’re surrounded by people who not only challenge themselves to do better on a daily basis, they challenge you to do the same in a supportive environment.

I’ve been at Nuera for a year now and while I like to think that I’ve evolved into a more effective marketer, I’m also cognizant that I still have a lot to learn. That speaks to the core ethos of the Nuera difference–I’ve never been around people this smart who are self-aware and inquisitive enough to actively solicit information and knowledge that could make them even smarter. Six months ago I shared a few things that I’d learned during my tenure and what amazes me is that in the next six months I learned just as much, if not more. I could probably write about what I’ve learned every month and still have fresh content for each post but I thought it would be best to share it on the eve of my first anniversary at Nuera.

My Days of Winging It Are Over

I like to think that I have pretty good instincts (several unfortunate haircuts notwithstanding) but I’ve emphatically learned that there’s no substitute for good preparation and a data-based approach. The best example of this would be our work within social video production. If I’m being perfectly honest, I had the concepts and storyboards for the first videos pretty much nailed down in my head before I arrived at the shoot. It likely wouldn’t have been an issue to just show up and direct both the people on camera and the people behind it. Here’s the thing though, while that would have worked for me, it’s not something that works for everyone else.

Rather than just going in and pretending I’m the Kubrick of short social videos, I compiled a document that consisted of an overarching goal, a shot-by-shot list, ideal sentiments to convey when on camera, and consistent theme that should be present within each video – a pre-production doc that put everyone on the same page before we started. The results were pretty staggering–the social videos we’ve filmed for that client currently have over 100K views in a relatively short period. There’s no way we could have achieved numbers like that if I solely went with my gut and it’s a testament to the Nuera approach of utilizing organization and planning to truly reach our goals and make a difference for our clients.

There’s No Better Feeling Than Improving Your Clients’ Bottom Line

One of my favorite moments at Nuera actually happened just a few weeks ago. We’d had a pretty great string of success for clients and I mentioned to our Creative Director that several clients had seen significant revenue gain as a direct result of something that we did. I’m not sure why, but his response kind of surprised me.

“That feels pretty good, doesn’t it?”

Here’s the thing–it did feel pretty good, but not for reasons it would have over a year ago. While there’s certainly some degree of pride in myself for helping accomplish this (I’m nothing if not vain), my prevailing thought was that it felt good mainly because I’ve gotten to know all of our clients and I was happy for them that they were finding success with us. They’re the ones that have invested the sweat equity for their business the same way that we have for ours. To know that the trust they’d given us was paying off in such a tangible way was a validation far better than any sort of self-congratulatory pat on the back I could give myself.

If You Can Think of 99 Reasons To Do Something, Try To Think of 100

“Hey this is a good idea because of this and there’s no reason to consider this variable that will almost certainly be entirely inconsequential”-me, September 2016.

“Yeah, we need to think about that inconsequential variable.”-Nuera, pretty much every time.

Frustrating as all hell? Yep. Necessary? Yeah… (said in a begrudging tone to save face). There have been several instances where I’ve been asked to do something so seemingly irrelevant or minute on a project that I’ve wanted to basically hurl my laptop across the room in frustration. Even more frustrating is that what I initially considered inconsequential has almost always been an essential component of a project’s success. It’s a testament to the culture that has been built at Nuera that the concept of leaving no stone unturned is not just a clunky idiom in an overwrought blog, it’s an integral part of our process.

I could write this blog every six months and I suspect I’d still return to the same sentiment: I still have so much to learn. Nuera has evolved so much in the year I’ve spent here and it’s not just my responsibility, but the responsibility of everyone that works here, to evolve right along with it. It might be difficult to build a startup from the ground floor and the valleys may be lower when they happen, but the peaks are that much higher as well. It’s a trade-off I gladly accepted then and one I’m still overjoyed I accepted now.