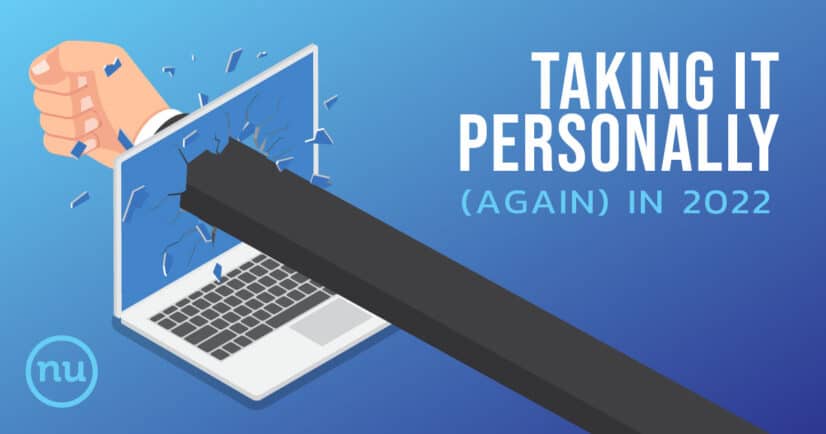 I recently wrote about how to respond to online reviews (fun!) and I’m sure discerning readers detected some subtext in the sections about negative reviews that I didn’t overtly spell out but certainly didn’t shy away from. Look, it sucks having to respond to negative reviews and comments when they’re unreasonable. Nobody goes to school to study how to talk some crazy old man off the internet ledge because he felt his artisanal gingerbread cookie was mundane.

Joe Sampson, whom you may know as Nuera’s intrepid co-founder and president, asked me to write about how I was feeling heading into the new year (this is draft #27) and I thought I’d take this opportunity to address a common concern of his about how I react to negative sentiments about our clients.

It’s always in the form of a question and that question is “Why do you take it so damn personally?”

“Why do you take it so damn personally? They aren’t insulting you.” -Joe, logically.

“Well, Joe. I take it personally for a number of reasons, not the least of which being that I vociferously disagree with the sentiment expressed, it completely ruined my train of thought, and most of all, I wouldn’t be good at this if I didn’t take it personally. To really succeed in this role, you have to work as a surrogate member of your client’s team and so when someone insults our clients, it feels like they’re insulting us. Log into Twitter for three minutes and wade through the dross of negativity on your feed whether it’s a political disagreement, some truly terrible pandemic news, or your head coach somehow not getting fired (editor’s note: SATISFACTION!) and then have to consciously engage with someone being belligerent. It’s unpleasant.” -me, progressively running out of breath.

“Have you always talked like a character in an Aaron Sorkin movie? You know I get that, and I appreciate what you said about being a surrogate member of a clients’ team but this is business. They’re not aiming at you and our job is to take this off our clients’ plate while objectively going about turning their customers’ frowns upside down.” -Joe, insightfully.

“I know it is, Joe, and don’t get me wrong, I think the vast majority of social media is used for good despite whatever today’s thinkpiece in The Atlantic says. I just know how much it burns our clients to read these negative things and when they’re unjustified, it burns me too.” -me, veering into total melodrama.

“We’ve taken this clumsy literary device a little too far and you’re not Dave Eggers (although your hair is similar ::snort laughs at own joke::). Why don’t you tell the reader what you’re going to do about it in the new year so we can make a clunky transition into your totally buried thesis?” -Joe, apparent recent reader of A Heartbreaking Work of Staggering Genius.

Marketers and business owners alike can let the people dripping with scumbag entitlement have their moment but shouldn’t let them occupy their headspace for too long. You can let them win the moment but you can’t let them win the day. I know that you’re aware of this and while I’m sure we’ll all continue to take it personally in this new year, there are a lot of things we can do that don’t require anger management courses.

Living Well is The Best Revenge

As a business owner, you’re confident in the caliber of your product or service and the best way to combat negativity is to continue to not only perform at a high standard in every facet of your business but to champion those wins in public forums. The belligerent complainers of the world are still very much in the minority so make it a point to express appreciation for the majority of people that help make your business prosperous. This can take many forms but be sure to champion team members and loyal customers (by posting their positive reviews) because they’re the engine that makes your business run and they absolutely see the negativity as well.

Maintain Perspective When Crafting Your Response

I know firsthand what it’s like to write a scathing rebuttal to a negative sentiment that uses colorful combinations of obscenities (it’s the most creative I will ever be) but I’ve never posted them publicly. While it’s certainly cathartic to do so, your actual response has to be measured, calm, and reasonable because it serves as the antithesis to the original negative sentiment. You’ll only be satisfied for about three minutes if you write what you really want to say and prospective customers will be turned away by a perceived lack of professionalism.

Tact is not something people usually associate with angry internet commenters so you need to go beyond their tone to figure out if there’s a legitimate gripe hidden amidst the hysterical bloviation. They may sound like a third-rate Lewis Black but if they have a complaint with merit, you still need to calmly respond to the specific issue they articulated. By affecting a calm demeanor in your response, you create an incredible tonal juxtaposition that will be noticeable to everyone that took their meds that day, and while you’re addressing the specifics, it’s your tone that most prospective customers will notice. This is not giving them a win, this is being a responsible marketer or business owner and that’s important to remember when you’re angry.

At Nuera, we have a rule that we need to respond to social media comments within an hour of them being left on our clients pages during business hours. In addition to helping us maintain an efficient workflow, this also affords us the time to take a step back and let logic replace the initial swell of anger that comes from reading some of these comments. You still need to respond as quickly as possible, but give yourself a little buffer to ensure that you remove emotion from the equation and respond in a manner that will best serve your brand.

Look, 2021 was a weird year for everyone on a number of levels but I was heartened by a number of things. Amidst the frustration of dealing with the belligerent masses, there were far more great things for our team to celebrate. We have terrific clients and we take pride in delivering outstanding work for them. THAT matters more than any bitchy Google review. Sure, there will always be instances where something goes awry (trust me, I hate that typo in a post more than you will ever know,) but the wins far outweigh the losses. As a business owner, marketer, or social media manager, you have to remember that while the unearned negativity is painful, it’s been happening for far longer than the existence of social media platforms. These insufferable imbeciles may now have the relative anonymity that social media provides and they know you have to indulge them but you don’t have to give them the satisfaction of knowing they got to you by lowering yourself to their level.

Here’s the thing, I’m still going to take it personally in 2022. If you’re like me, then you probably will too but I implore you to focus on the good things and to not belabor the bad. Cherish those amazing customers and clients, be proud of that post that really landed with an audience, and appreciate your team. A person can slander your business until they’re blue in the face (hypothermic people are notorious curmudgeonly reviewers) but I feel like we’ll all be ok if we maintain perspective and realize that providing a superior product or service is something nobody can ever touch.

If that fails, then go ahead and write out what you really want to say to them then delete it. Those three minutes are actually really cathartic before you go back to being professional. Not that I would know.