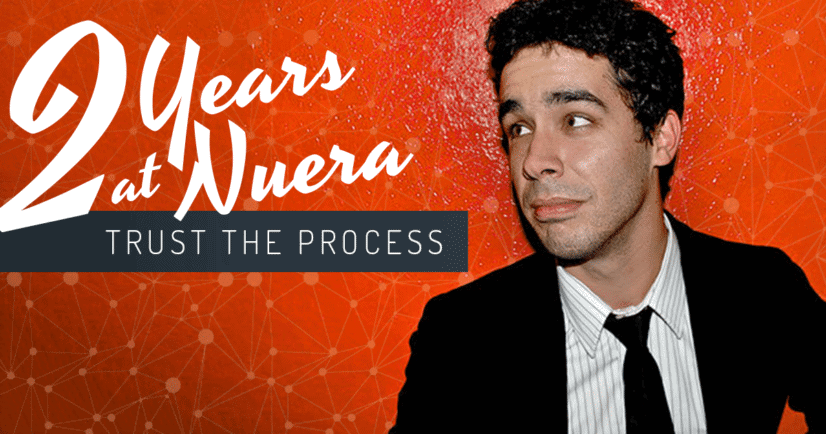 I’m writing this on the two-year anniversary of my decision to take a job as digital director at Nuera Marketing. As I read the Facebook post I wrote that day, I can’t help but remember the confluence of emotions I felt at the time–a melange of excitement, anxiety, and abject terror. It felt like Indiana Jones taking the leap of faith at the end of The Last Crusade but without a cool hat, bullwhip, or unbridled machismo.

It’s been two years since I wrote that post and I still feel excited, anxious, and terrified every single day I come to the office. While the latter might seem like a negative feeling, I’d actually consider it to be a positive one. The day I don’t feel terrified when I come to the office is the day I become complacent and that does nothing to help me, the agency, or most importantly, our clients. The stakes are just too high and I wouldn’t have it any other way.

A lot can happen over the course of two years. That song you loved back then could become the bane of your existence, you might notice more grey hair, or a politician could contribute to the startlingly accelerated decline of our democra–(ed note: this has been redacted). I’ve evolved significantly these last two years and so has everyone at Nuera–we’re all better at our jobs, our clients are experiencing remarkable returns on our work, and we’re building a Jacksonville marketing agency based on a quality of work that we can be proud to share with the world. Striving to improve every day has made a sizable impact on all of us, especially when viewed through a two-year lens.

Here’s the thing though–that’s not enough. It can never be enough. I’ve learned so much over the last two years but if there’s one prevailing thing that sticks out, it’s that stagnation and self-satisfaction are the enemies of progress. It took a (perhaps surprisingly) long time for me to arrive at that conclusion, but leaning into that idea has made me so much better at my job. I’m not going to bloviate like I’m some sort of guru or anything, but I thought folks may find it helpful if I described the two things that helped me arrive at that conclusion.

Full disclosure: when I first heard we were using the phrase “The Nuera Difference” to describe our work, I cringed. My first two thoughts were:

A few weeks ago I was tasked with filling out a two-year self-evaluation and I found the phrase “The Nuera Difference” making an appearance in nearly every answer I wrote down if not directly then in spirit. What strikes me now about what’s interesting about that phrase is that every Nuera team member has a different way of describing the same definition. If you were to distill each answer down to their essence though, each employee would define The Nuera Difference as something comparable to the inherent futility of a pursuit of perfection. We will never be perfect at what we do, but every single member of our team on every single day works to get closer. Some days we take baby steps and some days we take giant leaps towards that unattainable goal, but everyone moves forward in some capacity.

The idea of half measures is so boring–you have to give everything you have here to make sure your clients are seeing true, measurable value from your work. The rigorous vetting of ideas at Nuera is so intense that it can feel like you’ve fallen on your face when an idea that sounded great is rejected or described as “not fully-developed.” However, when you get that great idea for a client, work with the team internally to craft and refine it, and then your idea is approved, there’s no better feeling than putting it in front of a client because The Nuera Difference means it’s air-tight.

The Process of Unlearning

I only have a “career” because I had a passport in my pocket at the office of the startup where I worked in 2007. I’d been at the company a few weeks and was struggling to find my footing when my boss walked in and asked if anyone had a passport because there was an important conference in Berlin the next day where the company needed to be represented. I’m not sure my boss even knew my name when I raised my passport in my right hand but he replied “Ok then, we’re going to Berlin.”

I did not think it was cool. In fact, I was absolutely terrified. The idea of flying to Europe with my boss and the expectation that I’d have to be charismatic about a business that I frankly, knew alarmingly little about, felt like a recipe for complete and unadulterated disaster.

Then a funny thing happened on the way to the Reichstag. I ended up being really, really good at talking about a business I knew very little about. It was a music industry conference, and as the son of a music journalist, I spoke the language better than any 21-year old there (admittedly, I may have been the only 21-year old there). It was the first time it dawned on me that I actually might be good at this whole professionalism thing.

I have a career because of that company, but there’s a large part of me that is still trying to unlearn everything that happened there because I don’t want it to be a crutch at Nuera.

I don’t say that as a lamentation but rather to laud Nuera as a place where substance trumps superficiality when it comes to our work. I wasn’t a snake-oil salesman at my previous jobs, but I also rested on conversational laurels far too often. At Nuera, that is tantamount to treason. I can’t tell you how often I’ve responded to a question about a project with “the client really likes it!” only to be greeted with a response akin to “that’s not enough!” Joe wrote an article about this very subject and I read it often to try to train myself on how to unlearn things from previous jobs and reinforce the necessity of that sentiment.

The realization that data, process, and agility trumps any sense of instinct and charisma (although not at its expense) has occasionally been difficult for me to grasp. However, the results speak for themselves. Whenever there’s a collision of instinct and process, it’s process that wins out every time. It’s not exactly the most scintillating mentality but who cares? If our process delivers for Nuera’s clients the way it has over these past two years then leading with instinct becomes nothing more than a half-hearted vanity project. It’s that process that has allowed us to grow into a leading Jacksonville marketing agency these past few years.

If I could describe the best part of my two years at Nuera in one sentence it would be: “I’m so proud of what we’ve accomplished for our clients.” I’ve learned so much about marketing, process, and myself through this experience but that’s all been superseded by knowing that the extra effort we all put in each day has made a real, meaningful impact on our clients’ businesses. Those clients place a tremendous amount of trust in us and validating that trust each day is an incredible responsibility. So, it’s with a significant sense of pride that I say that Nuera has and will continue to accomplish that.